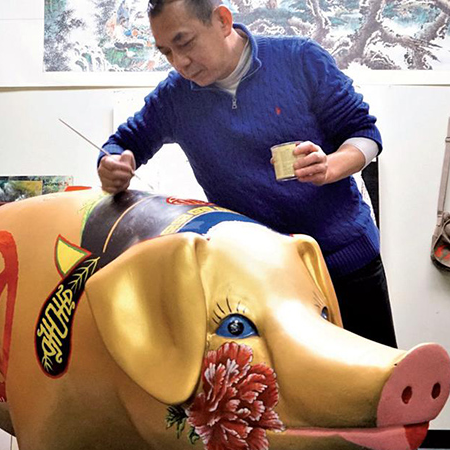 The Chinese New Year, unlike the Gregorian calendar, follows a 12-year cycle in which each year is marked with a different animal: the rat, ox, tiger, rabbit, dragon, snake, horse, goat, monkey, rooster, dog, and finally the pig. Although February 5 may have been the official kickoff of the Year of the Pig, it is not too late to celebrate.

Bellevue is honoring the new year with Ju Ju. What is a Ju Ju you may ask? Well Ju Ju, a name meaning golden pearl, is a life-sized fiberglass pig created by our very own Seattle artist Zuolie Deng. But this is no ordinary pig, Deng specially decorated her with calligraphy, red coins, and peonies.

Go check her out! Any weekday from May 20 – June 30 you can find our little piggy friend on the first floor of City Hall. It’s not every day you get to see a decked out pig at City Hall.

So, maybe you're late in the game for the festivities at Bellevue Collection and the New Year started in February, you can still celebrate! After visiting our piggy friend Ju Ju, make a day out of it and head down to Wild Ginger. From lunch, dinner, drinks, dessert, and kid friendly options, Wild Ginger has a little something for everyone. Go splurge on an egg roll or two, you know you want to.