RECAP: Exploring the Future of the Spring District at February’s BDA Breakfast

RECAP: Exploring the Future of the Spring District at February’s BDA Breakfast

With the title of being the largest transit-oriented development in the Western US - and the visibility of transforming a chunk of industrial area into a dynamic place to live and work – the Spring District is a big deal for Bellevue. That’s precisely why February’s BDA Breakfast offered attendees a deep dive into the Spring District’s future and what it means for our city.

Kicking off the morning’s program, BDA President Patrick Bannon welcomed the room and set the stage for what was ahead: a presentation by Greg Johnson, CEO of district developer Wright Runstad & Company followed by a panel discussion with representatives from major Spring District tenants. Both offered key insights into the story of how the Spring District came to be, what’s been built, and what’s in store for the future.

Johnson took the stage and led the crowd through a brief introduction to the history of the Spring District. The area had been predominantly occupied by a Safeway distribution center alongside smaller industrial tenants. When these businesses relocated, Wright Runstad & Company saw the opportunity to radically change the landscape of this area and create a new district, moving this prime spot of real estate in line with the City’s vision for the Bel-Red Corridor. Johnson emphasized the importance of partnership in a project of this scale, recognizing that without strong relationships with prospective tenants, the City of Bellevue and others, it wouldn’t have been feasible. With those in hand, they jumped, buying the property in 2007 with a plan to transform it into a vibrant new neighborhood of apartments, offices, public spaces and more. The district is master-planned with transit and connectivity in mind, Johnson explained, making it the largest “transit-oriented development” in the Western US, anchored by a Link light rail stop at the core. 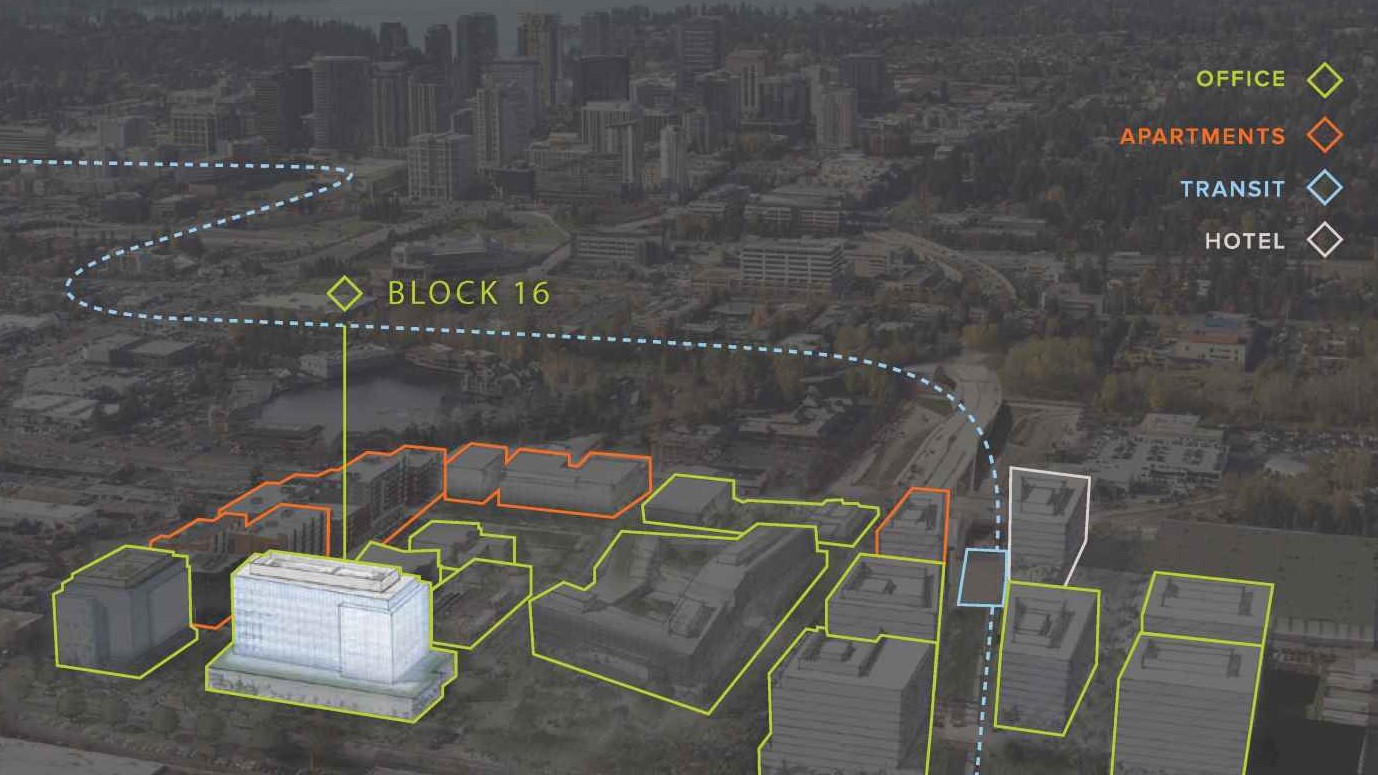 The first wave of development - which is nearly complete - includes three residential properties, is home to UW’s Global Innovations Exchange, two commercial spaces, a brew pub, and the new headquarters of REI. This section is already home for many residents living in the two completed apartment properties, with the third slated to open by June of 2020. REI is set to occupy their new headquarters this summer, and Facebook announced they’ll be occupying several of the district’s new buildings. Future development will bring an additional 1,324,000 square feet of commercial space, 258 more apartments and a 226-room hotel. Together, the Spring District will be home to over a thousand residents and home base for several thousand employees, marking a total $2.3 billion of investment.

As he finished showcasing the state of the Spring District, Johnson was joined on stage by a panel of leaders from major Spring District tenants for a discussion, including: 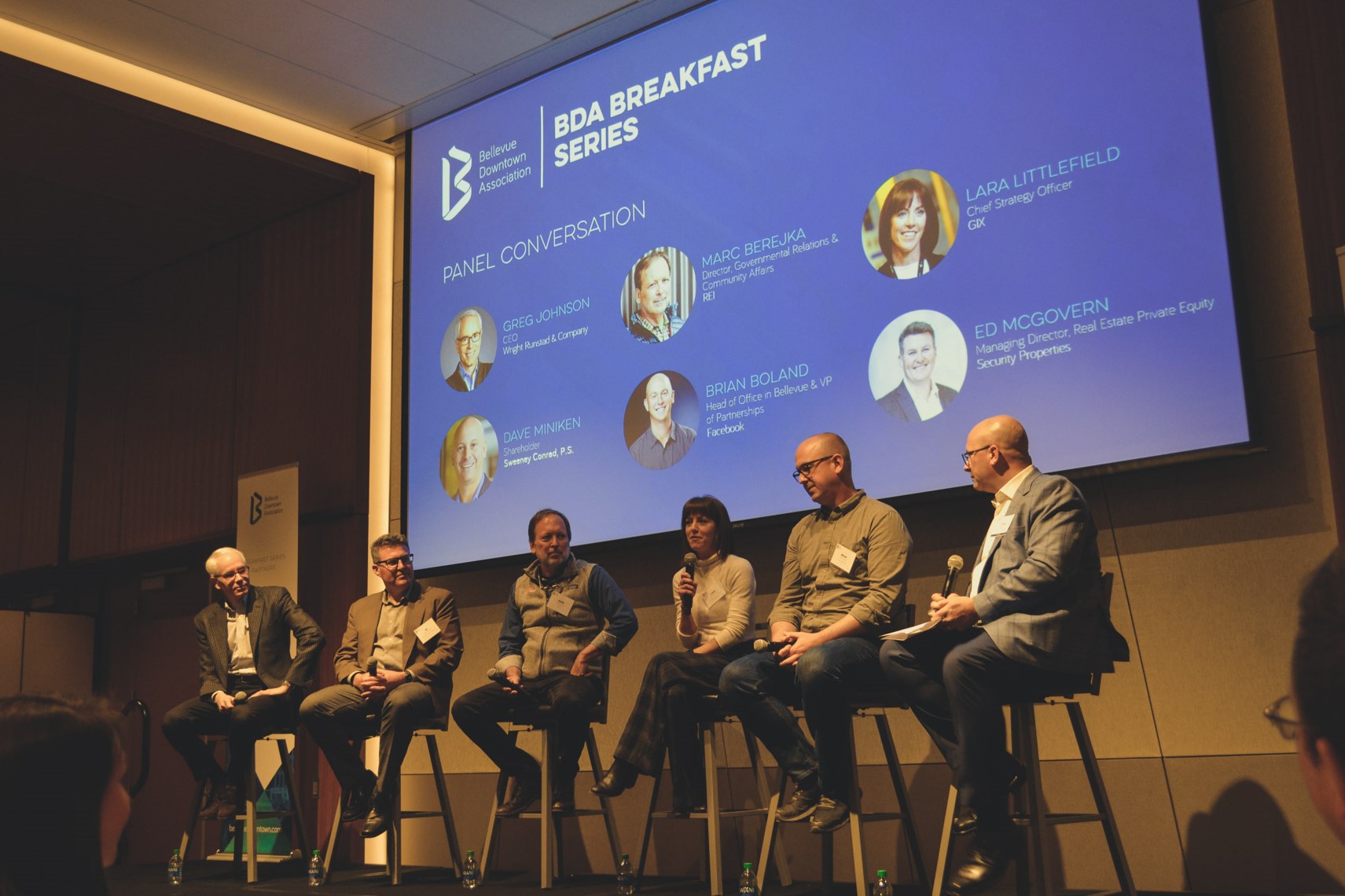 The panel kicked off with each member sharing their overarching interest in the Spring District and why their organizations are investing there. While every panelist’s answer was unique, they all had a common theme: The Spring District is a connected and accessible addition to Bellevue, and that’s an opportunity to create community. Marc Berejka shared how REI took interest in the district as a place to design an entirely new concept for their headquarters, through making a space that is open and accessible to the community surrounding it, and that offers easy access using public transit. This accessibility was also critical to Facebook’s decision to expand in the Spring District, with Brian Boland sharing how the company’s focus on creating community can be easily realized in this emerging area.  All panelists shared a common thought that resonated with the crowd: The Spring District is a new part of the Bellevue Community, one that contributes to and extends Downtown’s dynamic nature to the other side of I-405.

As the panel wound down, the room quickly jumped into conversation. Not only has the Spring District already transformed the area it occupies, but it’s bringing more connectivity to the region for residents, employees and organizations. Ultimately, guests left with excitement for what the Spring District does best - extending the Downtown experience – and that’s something we can all look forward to.