Second to None: Eastside Children’s Academy Offers Care and a Cultural Haven

Second to None: Eastside Children’s Academy Offers Care and a Cultural Haven

From 7 a.m. until 6 p.m. during the average work week, Eastside Children’s Academy has remained open for business at limited capacity since the novel Coronavirus arrived on the local scene earlier in the year. 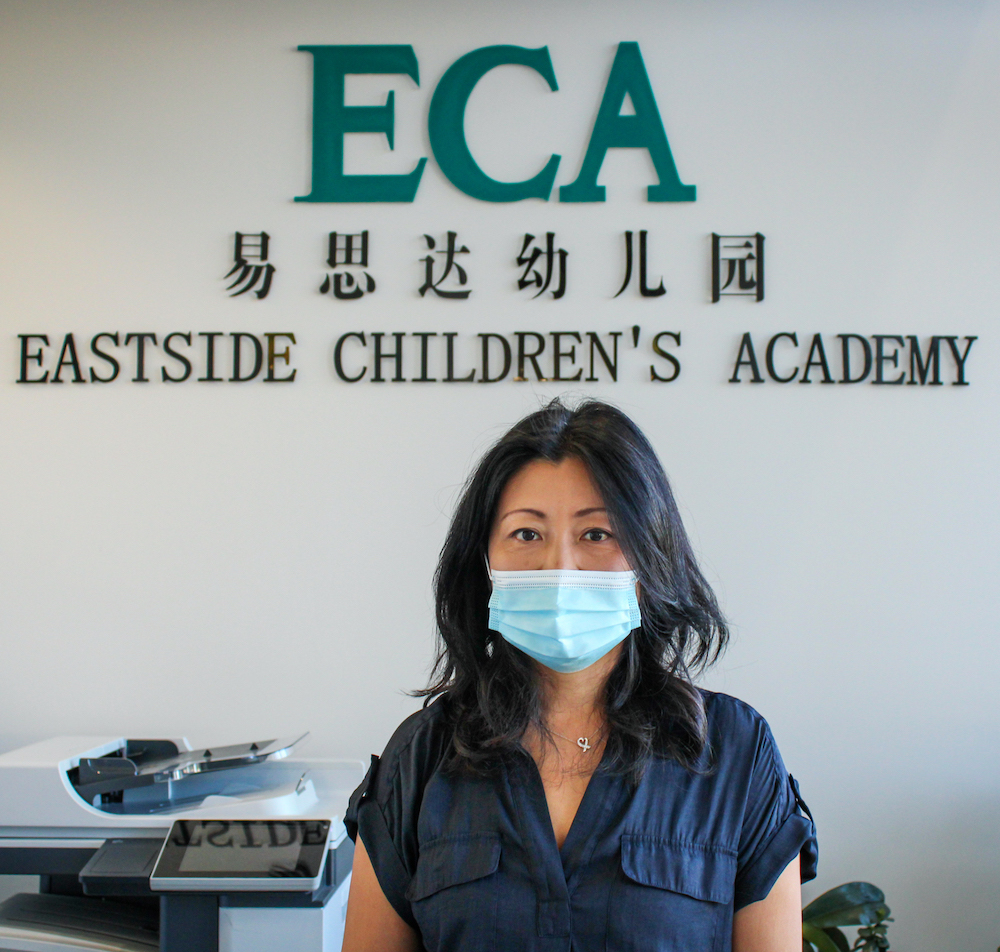 As a mother of two young children, a businesswoman and higher education student, owner and director Jenny Tan carries a heavy load, but her commitment to supporting her clientele through the pandemic has never wavered.

Since its doors first opened in January 2019, Tan said her institution serves a diverse clientele that includes families employed in the medical field and other first responders on the proverbial front lines combating vital health concerns and impacts caused by the global health crisis. To boot, Tan said a wide array of local companies, including, but not limited to Microsoft, T-Mobile and Google, offer corporate and merchant discounts and other financial benefits through a regional passport service that customers can redeem.

“I think we work really, really hard to keep our doors open every single day during this pandemic,” Tan said.

In accordance with mandates from local government officials and the Department of Children, Youth and Families, Tan has followed evolving protocols in practicing responsible public health and security measures to maximize protection for her students, guardians and faculty.

Inside the main entry, automated temperature monitoring stations and hand sanitizer dispensers have been installed as a proactive requirement before checking in at the reception desk. In addition to special COVID-19 precautions, parents can access and stream a live feed from security cameras on site to monitor activity in the classrooms.

While the academy still honors its open door policy that permits parents or guardians to observe their child at any point throughout the day, Tan said she does not encourage frequent visitation for the protection and safety of her staff and students.

Under previous circumstances, the academy exercised an open door policy that permitted legal parents or guardians to visit and observe their child at any point throughout the day. Although now, in striving to limit risky scenarios for contact and exposure, Tan said her facility coordinates a designated pick-up and drop-off timeframe for each student.

While class pictures and seasonal festivities might look a little different from years past, with socially-distanced portraits and an annual harvest party limited solely to her students, Tan said she has found her practices and role as a director have become more dire and dialed in on surveillance that extends beyond contact-tracing within the student body. Fortunately, Tan noted there have been no confirmed cases among students, staff members or families reported to date.

But despite even her most vigilant efforts, Tan says enrollment has dropped about 50 percent over the past several months as remote work and asynchronous routines become an increasing norm for a vast number of families.

When infection and hospitalization rates peaked during early spring in Washington state, the academy decided to offer a virtual alternative and other online resources on a trial basis for students who dropped from the attendance roster for in-person instruction. 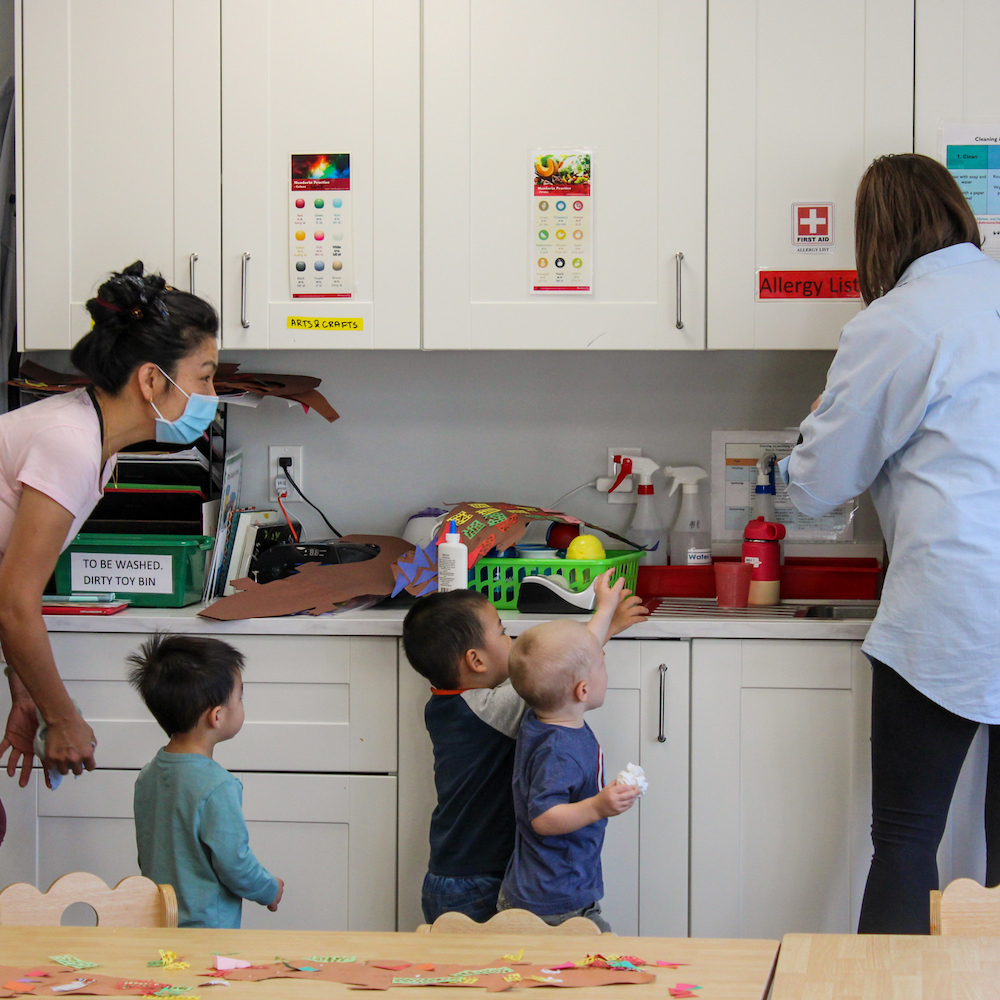 “We found it pretty difficult for the kids to be fully engaged [with remote lessons] at such a young age,” Tan said, conjuring up images of flustered parents trying to wrangle toddlers like feral kittens to concentrate on the computer screen. “So, we decided to just keep going with our in-person education because that's where they [benefit] most from hands-on experiences and social interactions, which students in those age groups really need,” Tan said, referring to the curricula currently available for students between six weeks old and pre-Kindergarten.

After immigrating to the U.S. from Shanghai, China thirty years ago, Tan since relocated to downtown Bellevue in 2011, where she said she never quite found a perfect match for her children in different preschool and daycare centers -- especially none that fulfilled a multiculturalism component that Tan deemed a high priority in her search. Upon discovering that absence, she launched Eastside Children’s Academy and has remained dedicated to filling that void.

“I wanted to provide high quality care and also be able to teach kids about Chinese culture, language and more,” Tan said.

With an aim to foster a dual-language learning environment, a majority of the teachers Tan hires are originally from China, a credential she believes has proven invaluable in the classroom and further enriches relationships with students through personal history and heritage.

“They have that consistent bonding with the students to ensure they are learning based on cultivating an interest in a bilingual environment. Every classroom with students ages two and older will be collaborating with an English and Chinese-speaking teacher,” Tan said.

According to the Center on the Developing Child at Harvard University, children experience a significant period of neurological growth and language acquisition between ages one and three years old, which Tan cited as a crucial time frame to engender curiosity and proclivity for dual-language use before entering elementary school.

“A lot of families are here not only for the Chinese education and the bilingual piece, but they're here basically for a loving, caring, localized school,” Tan said.

In her mission to realize a bold new venture, Tan returned to school after earning a degree in chemical engineering at the University of Washington and enrolled in an early childhood development program at Lake Washington Technical College where she attends classes in the evening after closing up shop at the academy.

“It’s all worth it. It’s been a really rewarding field,” Tan said of her career pivot and the demands that accompany owning and operating her business.

Although there are perhaps a million reasons to feel easily entrenched in a moment that divides, depletes and discourages us, Tan often reflects on how her business has helped preserve community values and strengthened a supportive network families can rely on. Personally, she said she has been encouraged by the growing number of dining options downtown that represent a wider variety of Asian and Pacific Islander identities.

“I mean, it's just so diverse, our community. And that's what I really love about Bellevue, and why I wanted to open this school, to support our whole community,” Tan said.