At April’s BDA Breakfast, more than 200 attendees gathered at Meydenbauer Center to hear Bellevue Mayor John Chelminiak give a State of the City address. Key themes including intentionality, boldness and inclusivity emerged from the optimistic account of Bellevue’s present and future. 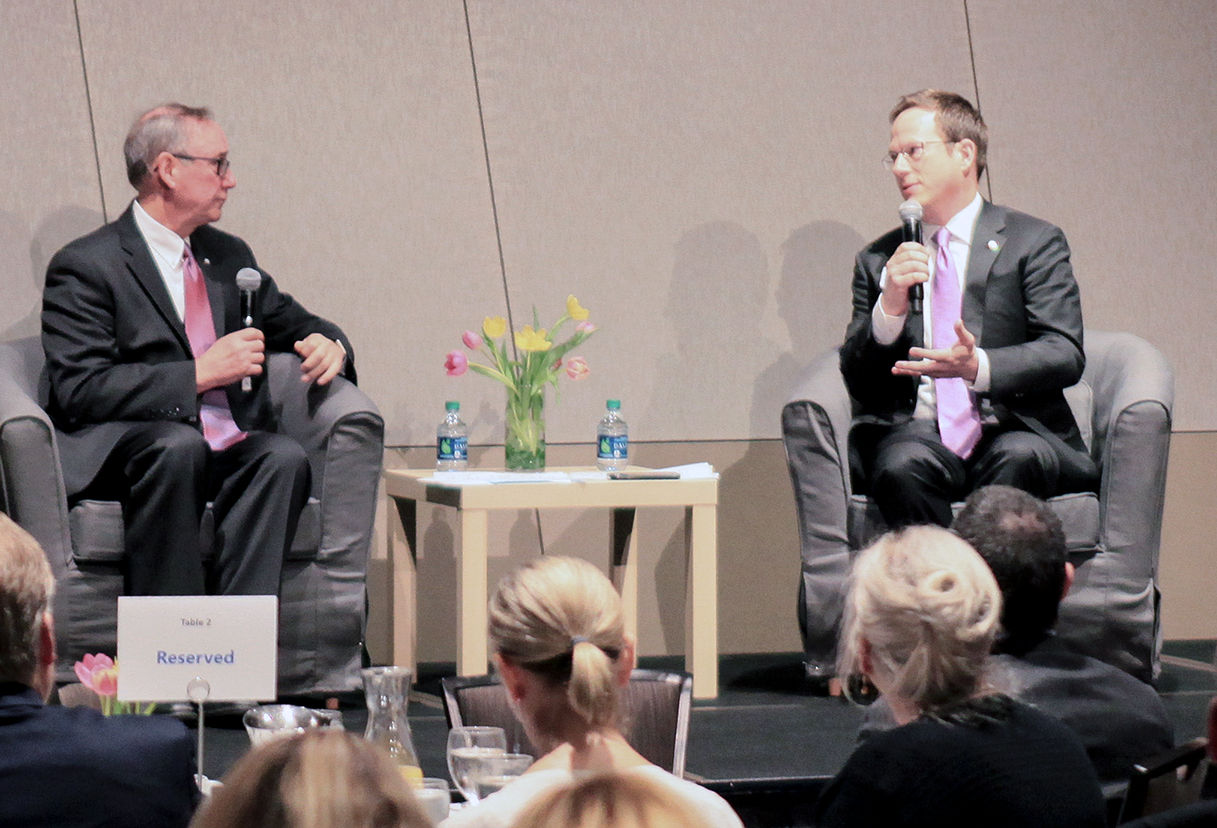 Chelminiak went on to explain that Bellevue has been bold since its beginnings as a whaling hub, but being bold doesn’t mean being reckless or brash; it’s about being intentional. The Mayor thanked City staff for their efforts in shared leadership and remarked how taking action makes Bellevue a better place.

Housing
Affordable housing is an issue on everyone’s mind as Bellevue continues to prosper and expand, and the importance of maintaining Bellevue’s character while sustaining and creating mixed-income single and multi-family neighborhoods is important to the Mayor and the City. Partnership and careful growth planning are vital to making Bellevue “a place where kids who grow up here can return from college to live and work here.” The Mayor acknowledged and thanked Microsoft’s “beyond incredible” commitment of $500 million to the affordable housing issue. “We can do a better job of helping people keep up,” the Mayor said, in terms of addressing homelessness and those at risk.

Economy and Connection
Thanks to many intersecting factors, Bellevue’s economy continues to boom and is home to an increasing number of powerhouse organizations (Thanks for coming home, Amazon!). Downtown Bellevue now has 14,000 residents, a far cry from when the Mayor moved to Bellevue years ago when just two children took the school bus. So, what attracts business to Bellevue? It’s a great place to be. Chelminiak called out the Downtown Park and the completion of the circle, the improvements to the Eastside Rail Corridor and plans for the Grand Connection, which all add value for businesses, employees and residents alike.

Transportation
Bellevue is a regional crossroads, and even Bellevue’s early city leaders recognized the importance of connections when they insisted a highway cross the lake. Today cars, bikes, trails and rail are all a part of Bellevue’s transportation portfolio. Thoughtful planning of King County Metro bus routes, implementation of Sound Transit Light Rail, 18 miles of added bike lanes and increasing access to trail systems contribute to Bellevue’s multi-modal connectivity. Technology and strong opinions will keep the conversation evolving, but Mayor Chelminiak emphasized that with continued partnership and consideration for all sides (and modes), transportation will not only contribute to mobility, but also to economic development and smart growth.

Growing Great Communities
“Cities exist as a catalyst to great communities," said the Mayor, and Bellevue is no exception. In the Question & Answer conversation portion of the presentation, the Mayor reiterated the importance of intentionality and partnership, “amicable disagreements,” continued cognizance around Bellevue’s shifting demographics including age, income and cultural diversity, and continued enthusiasm for bold action. In closing, when asked about his legacy, Chelminiak said he just hopes he’ll be remembered as more than, “the guy who lost the downtown Dairy Queen.” We think you’ve got that covered, Mr. Mayor!

Thank you to Mayor Chelminiak and all our attendees. Go forth and be BOLD, Bellevue!