Why Bellevue is Next for Vulcan

Why Bellevue is Next for Vulcan

Vulcan Real Estate has been instrumental over the last decade in transforming South Lake Union from an industrial area into a thriving office, retail, and residential destination for tech workers and innovation.

However, it doesn't end in Seattle. Vulcan has purchased several properties in the Downtown Bellevue core. Why Bellevue? Read on for more insight into Vulcan's history in this area and its planned expansion to the Eastside. 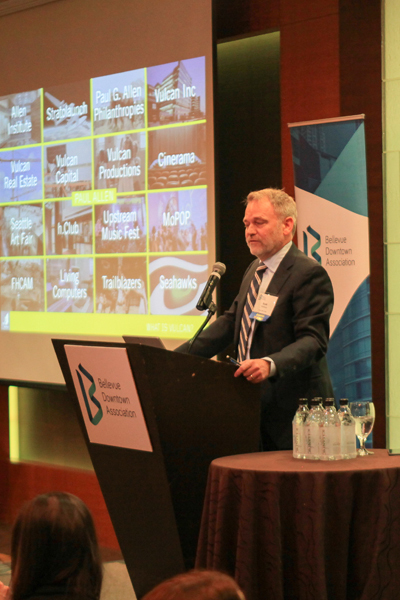 Vulcan follows an "inclusive development" approach which stands on three pillars: respectfully engage with all stakeholders, preserve & protect the existing natural environment, and develop a space that solicits community connections.

In South Lake Union, Vulcan has been an economic engine. It has been a catalyst for development, bringing 40,000 new jobs new jobs to the area and over $10 billion in investments ($740 million in infrastructure improvements). It has returned $200M in tax revenue to City of Seattle. It has helped South Lake Union develop into a vibrant mixed use area with 100+ retail, restaurant and service providers and over 12,000 housing units - 12% of which are affordable.

Starting in 2017 and continuing into 2020, Vulcan has initiated projects University District, Yesler, 23+ Jackson, and Bellevue. It promises to continue its "inclusive development" approach to its upcoming projects.

What's Next for Bellevue?

To finish, Scott acknowledged the BDA's Land Use & Livability Committee role in updating the Downtown Land Use Code. He looked forward to the transformational effect of the light rail moving into Downtown, and anticipates the BDA Transportation Committee's role in shaping the future of transportation in Downtown Bellevue.

Register for the April BDA Breakfast

Want to make sure you don't miss out next month? We will be hearing from Bellevue Mayor John Chelminiak and Deputy Mayor Lynne Robinson regarding the state of the city. Registration is live: