The Bellevue Downtown Association Comments on the Wilburton DEIS

The City of Bellevue is in the process of considering a rezone of the Wilburton Commercial Area. There's been significant headway, but there are many more steps to accomplish before completing the work. To date, the City Council has appointed a Community Advisory Committee (CAC) to draft a report recommending a vision for the Wilburton area. Their work is expected to conclude this April. The public comment period ended for the Wilburton Draft Environmental Statement (DEIS) this past Monday. The final EIS is expected to be completed this June. Both the CAC report and final EIS will be reference tools for the next stage of the rezoning process. With the two documents, the Planning Commission will begin its work on crafting land use code amendments that will later be issued to Council for final review and adoption.

The Bellevue Downtown Association is committed to actively tracking and contributing to the Wilburton land use discussion. We'll continue to participate through the completion of the Community Advisory Committee work, the Planning Commission land use amendment process, and Council’s final adoption. Hopefully, it doesn't take 4 years to complete like the Downtown Land Use Code Update!

The BDA has made the first step in its advocacy work with regard to this project. The BDA Land Use and Livability Committee initiated a member review of the Wilburton DEIS and submitted a letter representing member feedback. To read the letter, click BDA Comments re: Wilburton DEIS.

Want to be a part of the discussion? Request to be added to the Land Use and Livability Committee by emailing Matt Jack, BDA Policy Manager.

Where is the Wilburton Commercial Area? 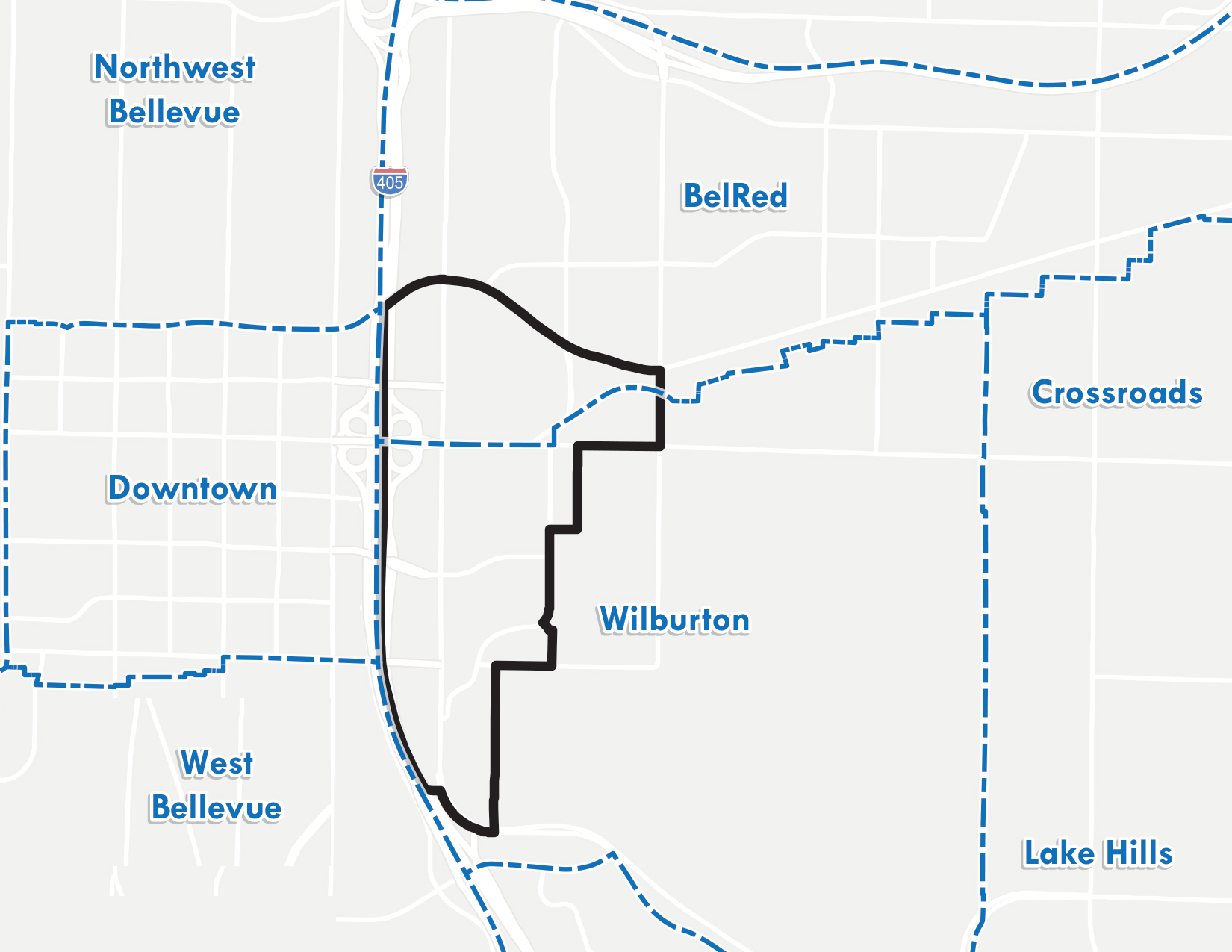 Separated by I-405, the Wilburton Commercial Area is just east of Downtown Bellevue. If you zoom out on a map and look at its boundaries, you’ll see a seahorse-like shape with the head to the north and the tail narrowing down to the south. The area is home to hospitals in the northwest corner, and from there, the rest of the area consists of car dealerships, strip malls, office buildings, retail and grocery stores, and restaurants. Residential space is limited with an estimated population of 394 people.

What’s the future of the Wilburton Commercial Area?
Wilburton’s multi-modal system is expected to expand over the coming years. The area will be served by three light rail stations, the Eastside Rail Corridor, the extension of NE 6th Street, and a future “Grand Connection” ped/bike crossing of I-405. The bones for an enhanced transportation system are in place, and it's sensible that the City is will rezone Wilburton to best leverage these future infrastructure improvements. 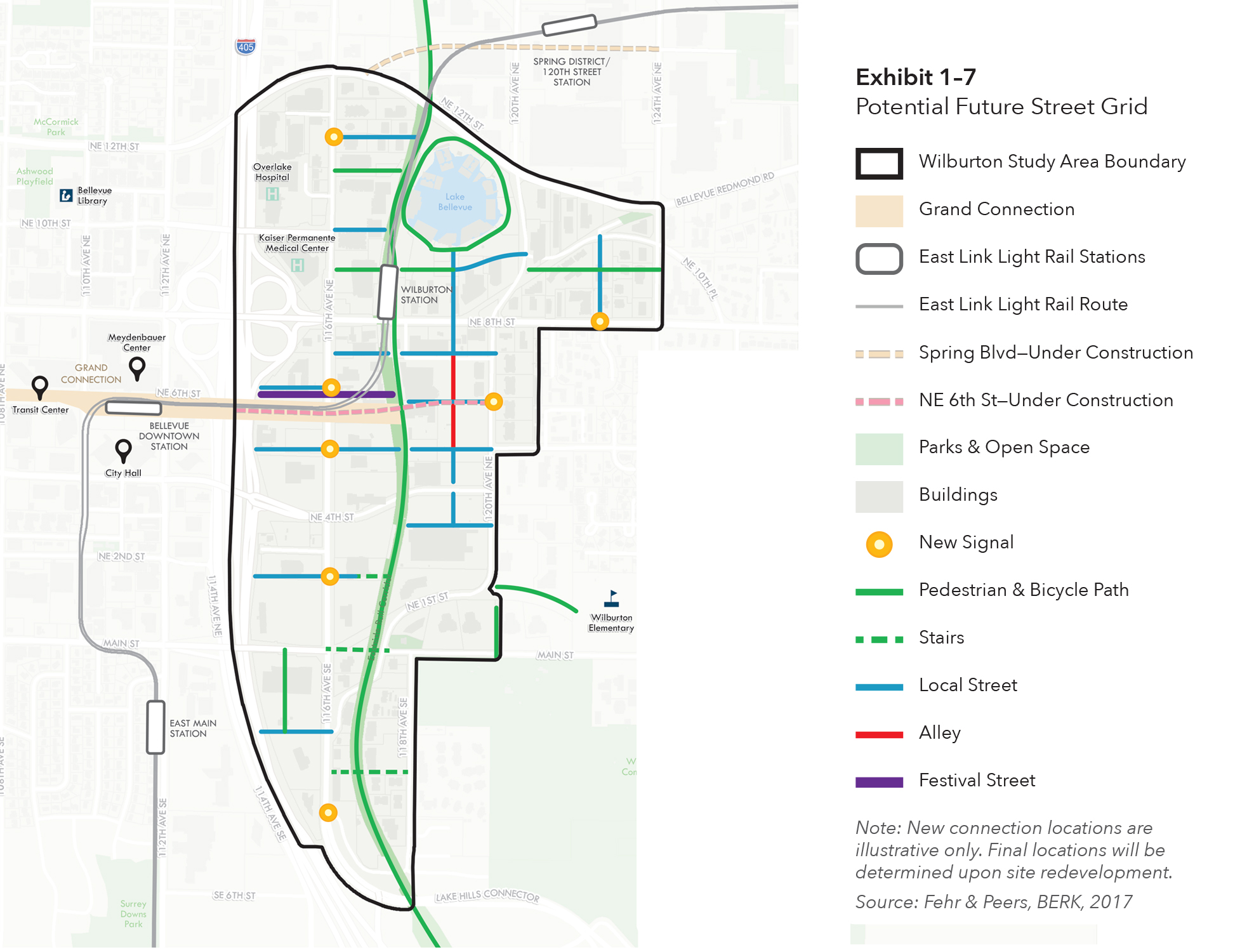 In January 2017, a Community Advisory Committee composed of residents, businesses leaders, and city commissioners was formed to help establish the Wilburton vision. Over the past year, the group used a set of principles outlined by the City Council to define character, identify public amenities, propose new heights, and recommend mobility improvements. The CAC helped to create two alternatives that are currently being studied in the Draft Environmental Impact Statement (DEIS) – a federally required document that identifies changes affecting the quality of the human environment. It'll serve as a decision-making tool for land use code changes. The final EIS is expected to be produced June of 2018. 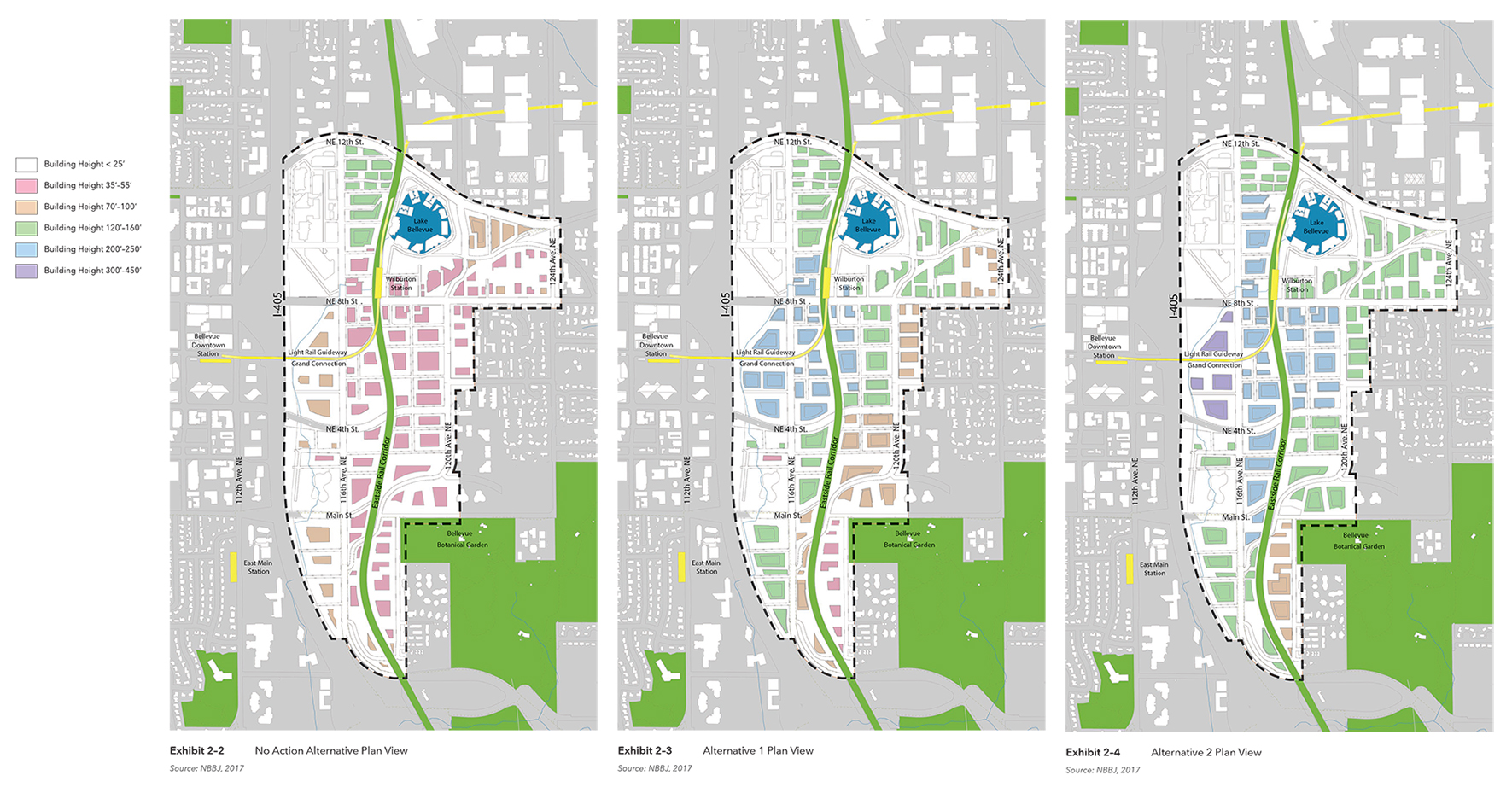